Civilisation is education – or troubled times in (seemingly) peaceful Helsinki

Daria Sowińska-Milewska and Anna Skocz – members of the Association – had the opportunity to take part in a job shadowing as part of the Competent and open-minded trainers on the European market 2 (Erasmus+) project, which took place from 7th to 10th March at the Finnish Study Centres association – Opintokeskukset ry in Helsinki (Finland). Welcome to the summary of the trip.

Our visit was postponed several times. The onset of the pandemic, then its recurrence, and the commotion of leaving. We finally landed in Helsinki during the second week of the war taking place in Ukraine. Sticking to the principle of doing our bit, even in difficult times, we decided, despite the complexity of the situation, to focus on the goals we had set beforehand and take part in job shadowing.

During meetings, discussions and observations of the work of our host education expert, Kukka-Maaria Vuorikoski, we had the opportunity to learn about the Finnish education system and the approach to lifelong learning, including adult learning. 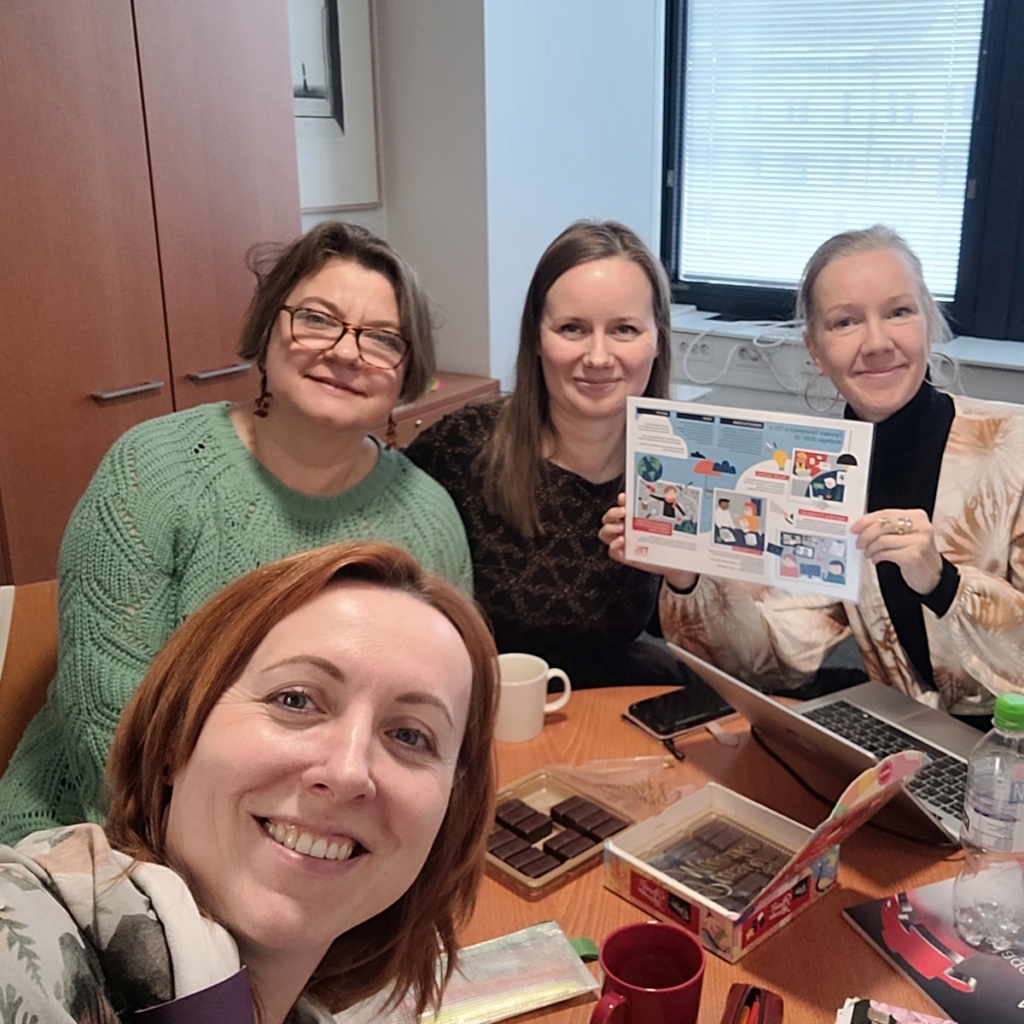 Participants at a meeting with the organisers

Civistys is an untranslatable term that seems to be embedded in the Finnish way of looking at education. The meaning of the word „civistys” in online dictionaries is, in the first place: civilisation and the next meanings are education, teaching, culture, and upbringing. However, that still does not reflect what Finns understand by the term. Education, by definition free, unfettered, open and accessible to all, responding to personal needs, is supposed to lead to the comprehensive development of the person; foster development, social cohesion and active citizenship. Civistys – that’s the direction, the purpose for which we do education, we heard from our Finnish expert.

Interestingly, on official government websites in the English language version, the term „liberal adult education” is used to refer to adult education. As Kukka-Maaria Vuorikoski pointed out, no political connotations should be found in the word “liberal”. In groups, centres and associations

Education in the Finnish system starts from nursery school, through primary school, then the equivalent of the former Polish lower secondary school, with a school-leaving exam up to university.

You can see the education system in Finland presented below in one graph; and you can find out more about the system at: www.okm.fi/en/education-system Adult learning, of most interest to us during our visit to Finland, is provided by adult education centres, people’s universities, summer universities, learning centres and sports institutes.

Our host organisation, Opintokeskukset, is one of 12 Finnish centres that act as umbrella and lobby organisations, bringing together, and supporting the activities and cooperation of local education centres. Local education centres are run by NGOs, political parties, and trade unions. If they want to benefit from public funding for the courses they run, they must work with one of the centres.

Adult education is provided by education centres or locally, by their members. The topics covered are consistent with the needs reported. All it takes is for a group (even if only 5 people) interested in a particular topic to gather to organise a training or course for them. There are short training courses, and long courses, onsite and online. 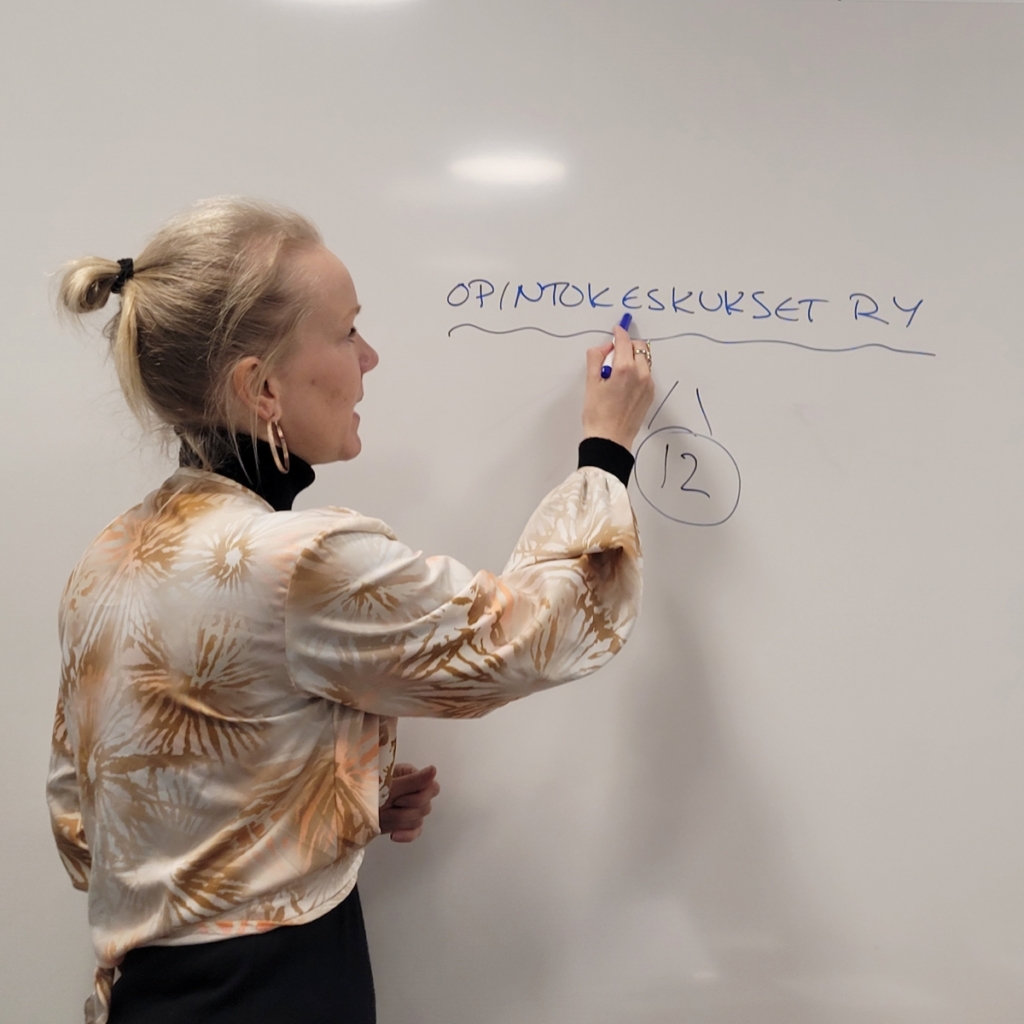 Our mentor during job shadowing

Qualifications inscribed in the system? Not necessarily!

One of the topics of discussion topical during our visit to Finland, especially among those involved in Finnish adult education, was the attitude towards the validation and recognition processes associated with the Finnish Qualifications Framework. In Finland, from August 2021, training centres can also submit their proposals to the qualifications register. The discussion we had the opportunity to witness revolved around problems related to the validation of acquired qualifications. In centres where, until now, there has not been a rigorous check of what level of knowledge and skills those completing the course have, this may necessitate many changes. Representatives of adult education centres are also asking themselves whether they even want to describe and report to the Finnish-wide system the competencies acquired during training and classes in the centres.

This does not imply an aversion to the system but rather to enclosing the effects of adult education processes in somewhat formal and rigid procedures. It is a matter of pride for our hosts to be able to present an individual education account where points for formal education are accumulated, according to the system.

The awe-inspiring statistics of adult learning in Finland (2018 figures show that one in two people aged 18 to 64, or 1.6 million people, took part in courses designed for adults – www.stat.fi), do not mean there are no problems.

A meeting at the "blue-collar workers" training centre – TSL (Tyovaen Sivistysliitto) showed that also in Finland not everyone wants to learn and benefit from the education centres’ offers. It is becoming a challenge to encourage people to take advantage of a wide range of vocational courses to improve skills, including the basic ones.

Basic literacy, numeracy and digital skills courses are attended by poorly educated people and refugees and immigrants. In Finland, as in Poland, it is the most difficult to persuade those with less educational background to benefit from education.

The topic of the Russian invasion was present in our conversations with our host Kukka Maria Vuorikoski and guests. It influenced the modification of the visit plan and the inclusion of additional topics. Reports from the front, and about the situation in Poland, were the constant background to this focused and thoughtful visit. We found that the underlying fears and emotions associated with the situation connected us even more than how we viewed adult education.

The discussion of ways and methods of integrating foreigners and working with refugees became an important issue. A meeting with a representative from the employment bureau, who runs a counselling service for migrants and refugees, also made it possible to see the difficulties in doing so. Together with our host Finnish women, we considered emigration and refugee scenarios.

A perfect visual summary of these deliberations seems to be a photograph seen at the Ateneum Museum in Helsinki, by Hannele Rantala, under the title The Emigrants, showing a woman’s hand in a plastic, transparent glove (the kind we use in shops during pandemics) with painted nails… but the nail polish is applied not to the hand, but to the glove. It reminded us of the problems of integration, which can be as artificial and untrue as a plastic glove, even if painted with red, elegant lacquer. The real person (like the hand in the photo) is only superficially wrapped in an awkward and artificial, even if decorated, layer of foil. The Emigrants by Hannele Rantala (photo by the Authors)

Job shadowing in the age of remote working

Post-pandemic job shadowing also meant that we accompanied the person working remotely. As a result, we got to know the places designed for remote working. The one we visited most often was Oodi - publiczna biblioteka w Helsinkach. It is a unique space, open to all, friendly, offering both places for children, comfortable armchairs, rooms and lounges for individual and group work, as well as spaces for print preparation, laminating or sewing and DIY. We spent many hours there, with computers and in discussions. The acoustics were also a delight, allowing many people to work in large spaces without a huge amount of noise!

A view of a fragment of the library space, photo by the Authors

Job shadowing also meant sharing lunches (exceptional price offers!) and staying in the café. We will also remember Helsinki for its smartphone GPS maps, which gave a walking distance of 20 minutes when asked for any address.

It allowed us to explore many of the city’s architectural wonders and townhouses from the early 20th century. Helsinki seemed quieter to us than Warsaw, almost as quiet as Żmigród. Calmness and composure, at all times of the day, reminded us of the quote from The Moomins: "Talking gets in the way of thinking so much".

During the war years, Finnish painters depicted still lifes with colourful flowers, exotic fruits and everyday objects as a counterpoint to the conflict, thus sending a signal: we are still alive, and we trust in the future. Our visit to Helsinki, at a time so close to the tragedy of war, is our signal.

Translation of educational material financed as part of Skrzydła dla STOP project from the funds received from NIW- CRSO under The Civil Society Organisations Development Programme for 2018-2030 CSODP (PROO).

This website uses cookies to improve your experience while you navigate through the website. Out of these cookies, the cookies that are categorized as necessary are stored on your browser as they are essential for the working of basic functionalities of the website. We also use third-party cookies that help us analyze and understand how you use this website. These cookies will be stored in your browser only with your consent. You also have the option to opt-out of these cookies. But opting out of some of these cookies may have an effect on your browsing experience.
Necessary Always Enabled
Necessary cookies are absolutely essential for the website to function properly. This category only includes cookies that ensures basic functionalities and security features of the website. These cookies do not store any personal information.
Non-necessary
Any cookies that may not be particularly necessary for the website to function and is used specifically to collect user personal data via analytics, ads, other embedded contents are termed as non-necessary cookies. It is mandatory to procure user consent prior to running these cookies on your website.
SAVE & ACCEPT